It is my belief that perhaps one of the greatest errors that any photographer can make is to become too focused on his subject.  As an example I offer up a recent photograph of mine (you can see it directly below this paragraph).  I have a long-term project, where I photograph Classic Cars on film.  If I have film in a camera that needs to be used up, I’ll often visit a weekly Cruise ‘In.  It just so happened that on one such visit, one of the gentlemen brought a really interesting custom Hot-Rod that he is building.  I ended up shooting a size-able portion of a 36-exp roll on that one vehicle.  In reviewing the photo’s, once I had developed the film, I was distressed to find that I had focused on the subject, and not the photograph.  As a result, most photographs that I took of the vehicle are largely unusable.  To make matters worse, all I would have needed to have good images would be to have stepped back a couple feet, so as to have fully included people admiring the vehicle in the photograph. 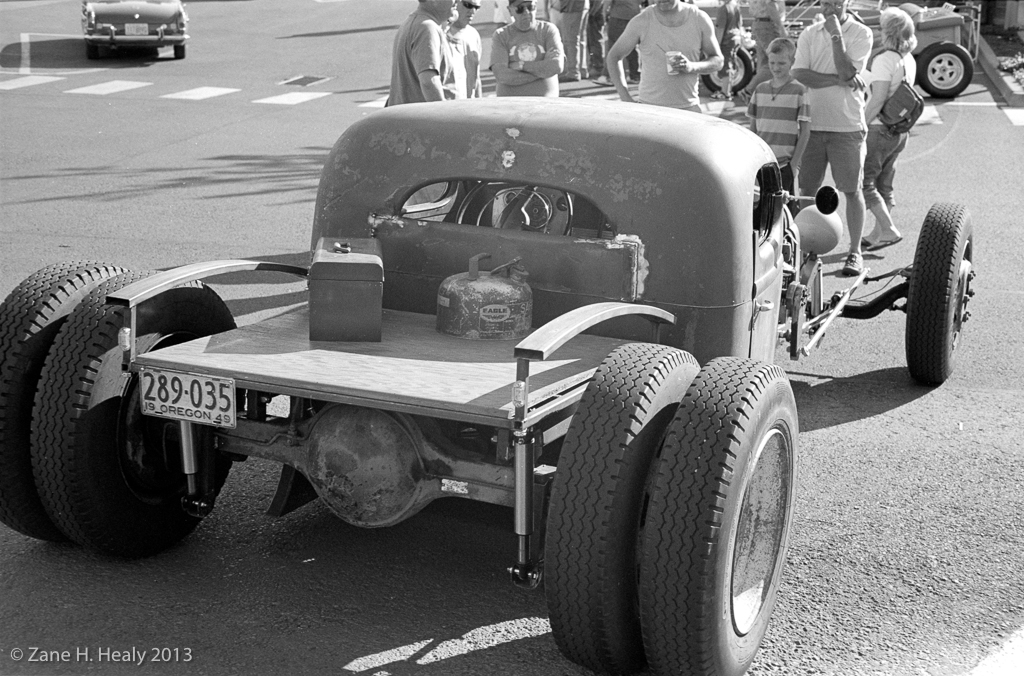 Realistically, I believe that, at least in my case, this error tends to be brought about by a desire to fill as much of the frame as possible with the subject.  It is vitally important to stop and think.  Consider how you might wish to use the image you are creating.  Most images taken today are digital, and they remain digital for their entire life.  For these images, cropping them might not be that important.  If the images will be printed, then it is almost guarenteed that they won’t retain the aspect ratio of the original image, but rather, they will be cropped to fit some standard print size.  When making prints, it is important to remember that 4×6, 5×7, and 8×10 three totally different aspect ratios.  At the same time 8×10 and 16×20 are the same aspect ratio.
If you are so focused on your subject that you have filled the frame, your final image will suffer.  In doing so you will have failed to account for how the final image will be presented, and you will be left with one of two bad choices.  First you can simply cut off part of one or both sides, this will cost you a part of the image that you considered important.  Secondly, you can matte the photo.  Now if the final print will be properly matted and framed, then realistically this can be the best option all around, though it will require custom cut matte board.  If the final result is simply a bare print, then this is the worst possible solution.
Now that I have discussed how focusing on the subject can impose limitations on your final output, it is time to consider the impact on your composition.  Let’s go back to my original example.  In that photograph, I have what I consider to be a good photograph of the subject that so captivated my attention. Yet it is a bad photograph because I failed to take into account what was happening in the background.  As a result I cut the heads off of the people there.
Something that also must be considered is that, by becoming too focused on your subject, there can be the potential to put yourself in physical danger.  Make sure that you are paying proper attention to your surroundings, and what is happening.  Many years ago, I was on a US Navy Frigate in the Persian Gulf and we had a British Navy helicopter that was going to be landing on the ship.  They were doing some flybys, and I, one to never miss a photo op, was trying to get a good photo.  Standing near a hatch to the one hanger bay, with my camera up to my eye, I failed to realize that they were coming in for a landing.  In fact I didn’t realize it until someone grabbed me by the collar, and pulled me backwards through the hatch.  The good news though is that I pressed the shutter button the instant before I was grabbed, and so I got the photograph.  Realistically in this case I wasn’t in any real danger, but most of you have probably seen examples of wildlife photographers that have been. And so this first post comes to and end.  If you’ve made it this far, it is my hope that I’ve given you something to think about, and that you’ve not found the experience to be something akin to torture.  Of course I might have just put the cart before the horse, as now I have to determine how to go about hosting a blog.
Since you’re reading this, its obvious I figured out how to host a blog.

One thought on “Focusing on the Subject”